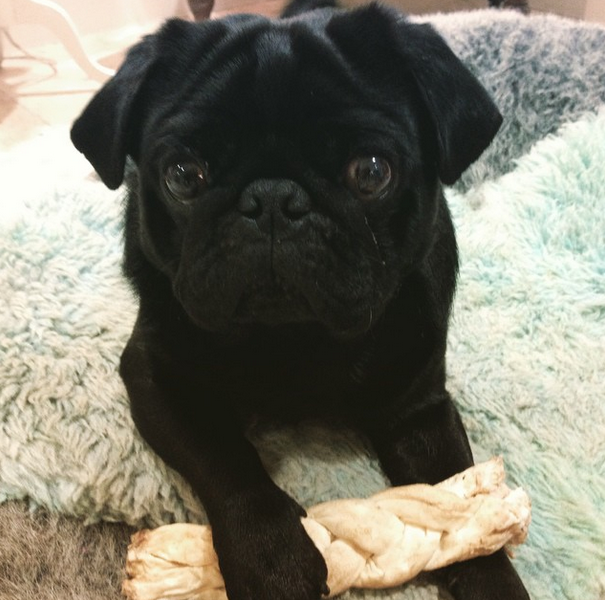 We have a new arrival here at Vintage Events HQ: Erroll, our gorgeous 15 month black pug. He has been named after Erroll Garner, a famous Jazz Pianist who was only 5 foot 2 and had to sit upon many telephone directories to reach the piano keys!

He was not expected or planned but was a rather wonderful present. We are all completely besotted with him, especially as we were hoping for puggy babies from Bertha but after two failed attempts we’ve accepted that it isn’t going to happen.

It is stated in ancient chinese documents, that short-nosed dogs existed in China at the time of Confucius, at around 700 BC. After the days sport, the bigger dogs followed the master’s chariot, while the small and short-nosed dogs where carried in the carts. Treasures, like pearls, jade, rare animals or dogs were considered imperial property. One emperor, Ling To (168-190 AD) liked them so much, that he gave these small dogs rank, the females received the same rank as his wives. He ordered that these small dogs are to be guarded by soldiers and fed only the best meat and rice. If anyone attempted to steal one of these dogs, he or she would be sentenced to death.

The original name for the short-haired pug was lo chiang-sze and was shortened later to the word lo-sze. During the Dynasty of Yuan (1206-1333 AD), it was costumary to parade all the emperor’s animals in front of his guests. Right after the lions, “golden-coated nimble dogs” were presented. This might have been the time that these dogs were introduced to Europe.

Josephine, before her marriage to Napoleon Bonaparte, had a pug named Fortune. When they got married in 1796, Napoleon supposedly refused to let the pug come up to their marriage bed at night. The pug then reportedly bit the general in the leg and Josephine announced that if the dog would not stay in the bed then neither would she. From then on Napoleon shared his bed with a Pug and Josephine.

The pug spread out all over Europe, after the Civil War also in America and has many different names all over the world: Mops in Germany and Holland, Mopsi in Finland, Carline in France, Doguillo in Spain.